You Doing Anything Nice For Christmas?


“Are you doing anything nice for Christmas?” Everyone gets asked this question, it’s one of those go to, easy to inquire things that folk ask without waiting for or really caring about the answer.


My usual reply and I'm sure that of most farmers is, “no, I’ve got to stay and milk/feed/muck out/look after the cows/sheep/pigs (delete as appropriate).”


The one time I did spend away was Christmas ‘94 on Bondi Beach, 25 degrees C and raining, real damping Cumbrian rain, the next few days were almost 40 degrees, proper hot, but it seemed only right that someone had arranged Cumbrian rain for the Cumbrian on the beach. I was half way through a backpacking tour of Australia and New Zealand, fulfilling one of my life’s ambitions up to that point by having a festive barbie on the beach.


But every Christmas morning since December 1994 I’ve spent in the milking parlour with dad, that’s almost a quarter of a century of working together to get finished as soon as possible and get back in for bacon sandwiches.


Our normal workday runs from half five in the morning until half six at night, weekends are whittled down to about 7 hours in total, but we somehow shave another hour off both the Christmas day milkings by spending all Christmas Eve bedding up, bagging feed, opening bales and generally doing absolutely everything conceivable to prepare for the following day. But things don’t always go to plan. Never work with children or animals they say, or with machinery that seems preprogramed to breakdown at 7.24am 24th December! 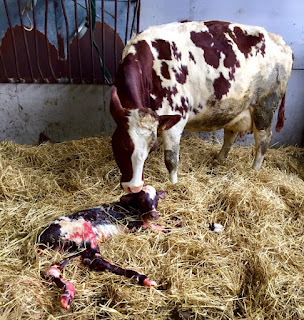 We’ve changed tyres, thawed frozen water pipes, calved cows and once even milked in the dark after an overnight storm cut the power, but we’ve always finished everything before we went and had them bacon sarnies. 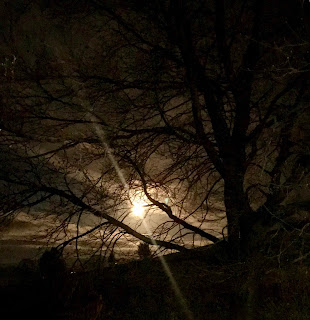 Nothing beats that early morning milking, me and dad setting off down the yard at 5am, half an hour sooner than the normal day so that we can spend more of the day inside with family. It’s always incredibly peaceful, a muted still until the calves hear the dairy door scrape across the small stones trapped underneath. They begin to ball for feed, then the milk cows stretch and yawn, almost cartoon like as they move nearer to the collecting yard. A push of the starter button rouses the milking parlour into life, twelve half ton ladies saunter in, checking each feed trough for remnants of feed left from the night before. 12 cows in, 12 cows milked, out they go. Repeat 9 times.


And that’s it, there is something magical about the simplicity of dairy farming. Almost everything is routine, even on Christmas day.


I certainly don’t want anyone to pity a farmer or even to ‘Thank a Farmer’. I can honestly say that I wouldn’t want to have a lie in before I watched our boys open their presents, I feel great having worked up an appetite for the overindulgence which is almost mandatory. And it’s not that I feel smug or noble about working whilst most are relaxing, I just love the fact that Christmas day is still a farming day, a very special farming day.


So, the next time somebody asks me “Are you doing anything nice for Christmas?”, I think I’ll reply “yes, I’m milking with my dad.” 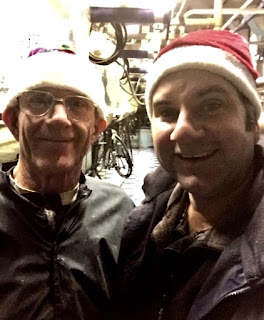 James Robinson
A few notes from our family's organic dairy farm on a wet hillside in south Cumbria.