Grandad never swore, blast and beggar was about as strong as it got. His Methodist beliefs prevented him for drinking alcohol (I never once saw a single drop pass his lips), it also meant his cursing was extremely mild, although the words still had quite a resonance when they came from his farm size 6ft 3” frame.


“Blast him”, he added whilst pulling himself out of his chair at the kitchen table to look up at the banking in front of the house. Although to be honest it’s a wonder he could see anything out of the kitchen window anyway, its six small panes constantly clouded with a thin film of farmyard grime on the outside and an equally obscuring mix of Aga dust and finger smears on the inside.


The nest which the silaging contractor had just run over was a curlew, the last curlew I remember nesting on the land around Strickley. I was 17. That’s 27 years since a curlew nested here. 27 years hearing them fly overhead in the spring, the iconic rising crescendo call of ‘curl-eee’ in the early morning mist as they passed us by to get to their nest sites higher up the valley, pushed there by a change in farming methods on our farm and on almost every farm in the parish. 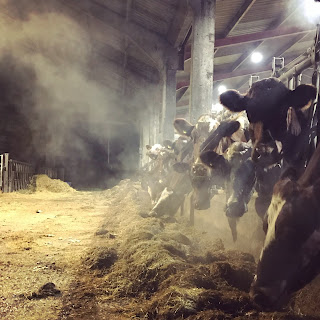 Cattle need to be fed though the winter, and a winter up in Cumbria is half the year. (A cumbrian year consists of 6 months of winter followed by 6 months of bad weather, the dour, glass half empty types tell everyone…..)


50 years ago, through those winter months the cows were fed hay in small bales, hay which was generally made in July and occasionally June. (The June hay was always considered the best stuff as it was younger, sweeter and more palatable to feed to milkers.)


But to make hay requires at least 4 fine days of perfectly fine hot weather, preferably blowy as well to fluff the grass up and dry it faster. The labour needed to move thousands of small bales was huge, not only in terms of workers, although most farms got folks in to help, but labour in terms of the physicality. Imagine lifting tens of thousands of numb cumbersome 25kg bales from field-onto trailers-onto an elevator-and then finally stacked into the barn until winter. Repeat this for every available fine day over a two-month period in a fickle area for sunshine and It’s no wonder farms were quick to take the more mechanised silage route. 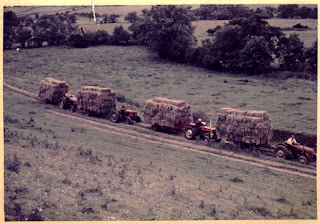 
So why the brief history of winter forage? Well, hay was cut on our farm from late June through July and August, meaning the curlew could nest in peace, undisturbed in the tall uncut grass, protected from hungry predators and sheltered from the savage Cumbrian weather.


For my tenth birthday I was given a fishing rod, nowt fancy because we had very little money, probably a second hand one bought from the auction or an advert in the Westmorland Gazette. I was born June 1974, but I was given my present early that year so that Dad could take me out fishing on our beck that weekend, as he was expecting to be making silage on my birthday, the 16th.


Fast forward 12 years and rather than cutting the grass for first crop silage mid-June like I remembered it had been on my tenth birthday, it was now mid-May. We’d brought it forward between three and four weeks in just over a decade. Great for winter forage quality, great for milk yields, bad for the ground nesting birds, bad for the curlew. 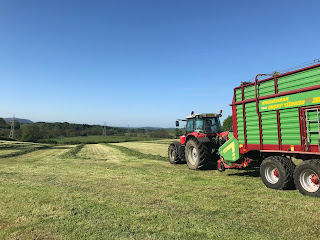 The change from hay to silage in modern livestock farming has had the same disastrous effect on the plight of the curlew as the invention of the mechanised mowing machine had on the now very rare Corncrake. Important developments in farming which are designed to improve the lives of the farmer and their workers, and help build a sustainable enterprise, can quite easily have unintended consequences on the wildlife which share our fields.

So, do I feel guilty?


Should I feel guilty?


I’ve written this short blog just as I began to read the excellent Curlew Moon by Mary Colwell. I hope that by the time I’ve finished the book I may have some answers to those questions.


Farming has created the rare harmony between food production and the living natural environment over thousands of years, so when a revolution happens which fundamentally alters that balance, something will inevitably suffer.


Farmers created the original harmony and farmers are probably best placed to remedy it too.
Posted by James Robinson at 12:41

James Robinson
A few notes from our family's organic dairy farm on a wet hillside in south Cumbria.